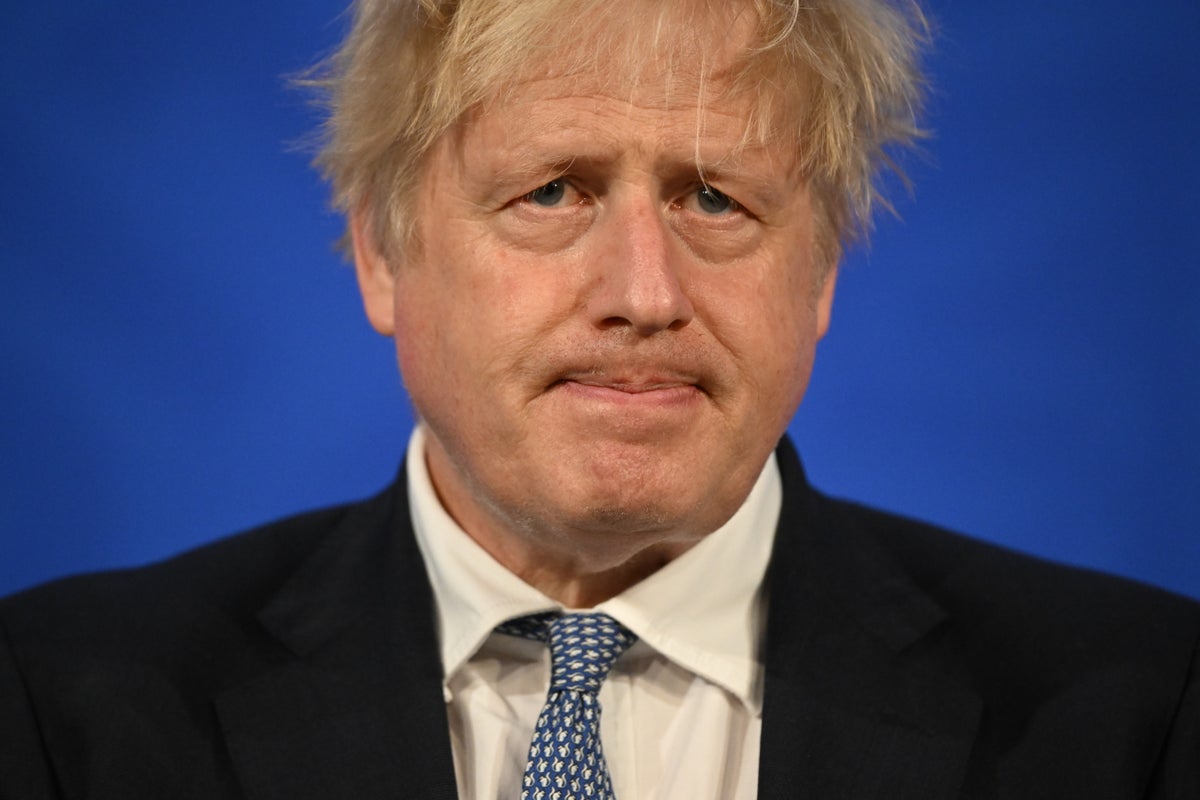 Nearly 30 Tory MPs have now called for Boris Johnson to go, or publicly moved to set off a confidence vote over his management, as he seeks to climate the fallout from the partygate scandal.

The Prime Minister was fined as soon as by police investigating Covid rule-busting occasions on the coronary heart of Government, for attending a gathering in Downing Street on his 56th birthday.

Mr Johnson, his spouse Carrie and the Chancellor all apologised in April after the Metropolitan Police handed them fastened penalty notices (FPNs) for the get together within the Cabinet Room on June 19 2020.

The PM is below growing strain from Tory colleagues to contemplate his position within the wake of senior civil servant Sue Gray’s pivotal partygate report, which cited “failures of leadership and judgment in No 10 and the Cabinet Office”.

A complete of 28 Conservative MPs have to date mentioned Mr Johnson ought to go, or declared they have written to the chairman of the backbench 1922 Committee, Sir Graham Brady, calling for a confidence vote.

Here is a round-up of all of these MPs and what they have mentioned on the matter.

The Calder Valley MP mentioned throughout a Facebook Q&A on April 13 that he felt each Mr Johnson and Rishi Sunak ought to step down.

The MP mentioned he wouldn’t be submitting a letter to the 1922 Committee of backbench Tories, saying he anticipated the Prime Minister would win the vote which might detract from the Government’s “day-to-day” business.

The former immigration minister advised ITV’s Peston programme on January 12: “Regretfully, he looks like a liability and I think he either goes now or he goes in three years’ time at a general election.”

In an opinion piece in The Guardian in April, she acknowledged that she had submitted a letter of no confidence to Sir Graham.

The Totnes MP, who entered Parliament in 2019, criticised Mr Johnson’s “actions and mistruths” in a social media put up, as he confirmed he had joined colleagues in calling for a confidence vote.

He tweeted on February 2: “Standards in public life matter. At this time I can no longer support the PM. I have submitted a letter of no confidence.”

The Amber Valley MP mentioned Mr Johnson ought to go away his put up on April 13.

Asked if he thought the PM’s position was untenable, he advised the PA information company: “Yeah, I think for a prime minister in office to be given a fine and accept it and pay it for breaking the laws that he introduced… is just an impossible position.”

It is unclear if he has submitted a letter to Sir Graham.

The chairman of the Commons Defence Committee mentioned the Prime Minister had lost his help, and urged him to “call a vote of confidence rather than waiting for the inevitable 54 letters to be eventually submitted”.

Telling Sky News it was “horrible” for MPs to have to defend partygate, he confirmed on February 2 that he could be presenting his letter to the 1922 Committee.

In a assertion on his web site on February 2, Sir Gary mentioned he had submitted a letter of no confidence within the Prime Minister.

The South West Devon MP mentioned: “I cannot reconcile the pain and sacrifice of the vast majority of the British public during lockdown with the attitude and activities of those working in Downing Street.”

Confirming he had despatched a letter to Sir Graham, the Waveney MP tweeted on February 1: “After a great deal of soul-searching, I have reached the conclusion that the Prime Minister should resign.”

Mr Aldous mentioned he had “never taken such action before” however he believed it was “in the best interests of the country” for a change on the high.

Former Tory chief whip Mark Harper confirmed in a tweet on April 19 that he had written to Sir Graham calling for a confidence vote.

In his letter, the MP for Forest of Dean mentioned that as Mr Johnson had obtained a FPN, he had concluded that he was unable to ship the “principled leadership” the nation wanted.

The former Brexit secretary confronted Mr Johnson at Prime Minister’s Questions on January 19, telling his get together chief: “You have sat too long here for any good you have been doing. In the name of God, go.”

It is unclear if he has submitted a letter to the committee.

Tory former minister Steve Baker mentioned he had been tempted to “forgive” the Prime Minister for breaking Covid lockdown guidelines however conceded that chance for him was now “gone”.

It will not be identified if Mr Baker has written to Sir Graham.

On April 21, he advised MPs it was the aftermath of former Government press spokeswoman Allegra Stratton’s resignation which led him to submit a no-confidence letter.

The former kids’s minister advised constituents in a Facebook put up on January 15 that he had “regretfully come to the conclusion that Boris Johnson’s position is now untenable”.

It is unclear whether or not he has submitted a letter to Sir Graham.

In an intervention after Mr Johnson’s assertion to the House of Commons within the wake of the replace on the Gray inquiry on January 31, the previous Cabinet minister advised the No 10 incumbent he “no longer enjoys my support”.

It will not be identified if the Sutton Coldfield MP has written to the 1922 Committee chairman.

Writing in The Telegraph in February, Mr Gibb, the MP for Bognor Regis and Littlehampton, mentioned his constituents had been “furious about the double standards” and the Prime Minister had been “inaccurate” in statements to the Commons.

The newspaper reported that the previous schooling minister had submitted a letter of no confidence.

Mr Gibb added: “To restore trust, we need to change the Prime Minister.”

The veteran politician mentioned the Conservative Party chief was a “dead man walking” politically after Mr Johnson apologised in January for attending a “bring your own booze” gathering within the backyard of No 10 throughout England’s first lockdown.

The North Thanet MP mentioned he had submitted a letter of no confidence after the main points of the Barnard Castle journey made by Mr Johnson’s former senior aide Dominic Cummings emerged in 2020.

Former well being minister Steve Brine posted a assertion on his web site on May 25, saying that he “cannot and will not defend the indefensible”, and that “rule makers cannot be law-breakers”.

The MP for Winchester and Chandler’s Ford additionally mentioned he had submitted his letter to Sir Graham.

The 2019 Red Wall MP declared publicly on February 4 that he had submitted a letter calling for a confidence vote.

In a assertion, he mentioned: “The breach of trust that events in No 10 Downing Street represent, and the manner in which they have been handled, makes his position untenable.”

In an emotional question within the Commons following publication of Ms Gray’s report into lockdown events, Mr Bell requested Mr Johnson if he thought he was a “fool” for following Covid restrictions at his grandmother’s funeral.

The Conservative MP for York Outer called for the PM to resign within the hours after Ms Gray’s report was revealed on May 25.

In a assertion on Twitter, Mr Sturdy mentioned the report “clearly shows the Prime Minister has presided over a widespread culture of disregard for the coronavirus regulations”.

He added: “While I thought it important to wait for the conclusion of the Metropolitan Police investigation and the publication of the Sue Gray report, I am now unable to give the Prime Minister the benefit of the doubt and feel it is in the public interest for him to resign.”

He has not publicly confirmed if he has submitted a letter.

Former minister Stephen Hammond indicated he had despatched a letter of no confidence in Mr Johnson to the 1922 Committee on May 26.

The Wimbledon MP mentioned he “cannot and will not defend the indefensible”.

Mr Hammond mentioned he had been “critical of the Prime Minister’s behaviour and the culture that existed in No 10”.

“All I can do as a backbencher is speak out and submit a letter,” he mentioned, including: “I have said for several months I already have done all I can as a backbencher.”

The MP for Ruislip, Northwood and Pinner joined these urging for the PM’s resignation on May 26.

He mentioned: “It is time for him to step down so that new leadership can take forward the important work of the Government in ensuring that our people and country prosper.”

He didn’t verify if he had submitted a letter to Sir Graham.

The Newton Abbot MP confirmed she was among the many letter writers in May.

The Basildon and Billericay MP mentioned on May 26 that “the Prime Minister no longer enjoys my support – I can no longer give him the benefit of the doubt”.

He has not acknowledged if he has submitted a letter to the committee.

The Conservative chairman of the Commons Justice Committee mentioned he had submitted a letter of no confidence in Mr Johnson’s management following the publication of Ms Gray’s report.

Sir Bob, the MP for Bromley and Chislehurst, mentioned on May 27: “Trust is the most important commodity in politics, but these events have undermined trust in not just the office of the Prime Minister, but in the political process itself.

“To rebuild that trust and move on, a change in leadership is required.”

The MP for Rutland and Melton, a member of the 2019 consumption, accused the No 10 incumbent of “misleading” Parliament with reassurances that coronavirus legal guidelines had been upheld.

She mentioned on May 27 that her position remained unchanged since January, when she submitted her letter of no confidence.

Former legal professional normal Jeremy Wright called for Mr Johnson to give up on May 30.

In a assertion on his web site, he mentioned he “cannot be sure that the Prime Minister knowingly misled the House of Commons”, however added partygate had cased “real and lasting damage to the reputation not just of this Government but to the institutions and authority of Government more generally”.

He mentioned: “For the good of this and future Governments, the Prime Minister should resign.”

It will not be clear whether or not he has submitted a letter to Sir Graham.

A spokesman for Carshalton and Wallington MP Elliot Colburn, who was elected in 2019, confirmed on May 30 that he had called for a confidence vote.

Mr Colburn advised his constituents he had handed in his letter, the spokesman mentioned.

The MP for Carlisle mentioned on May 31 that he had moved to set off a confidence vote over Mr Johnson’s management.

In a assertion posted on social media, Mr Stevenson mentioned he had not too long ago called on the Prime Minister to put himself ahead for a poll to “draw a line” below current controversies.

“Sadly, the Prime Minister appears unwilling to bring matters to a head and submit himself to such a vote,” he mentioned.

“Therefore, the only option is for the Conservative MPs to facilitate a vote of confidence. I have already take the appropriate action.”

The Brexiteer wrote in an article for the Telegraph on January 13 that Mr Johnson presided over a “moral vacuum at the heart of our Government” and called for him to “go now with some semblance of grace”.

The MP for North West Leicestershire mentioned it was “with a heavy heart” that he had submitted a letter of no confidence.

He withdrew it in March, arguing it was not acceptable to stage a confidence vote amid the preventing in Ukraine, however confirmed on May 30 that he had resubmitted it in electronic mail to constituents.