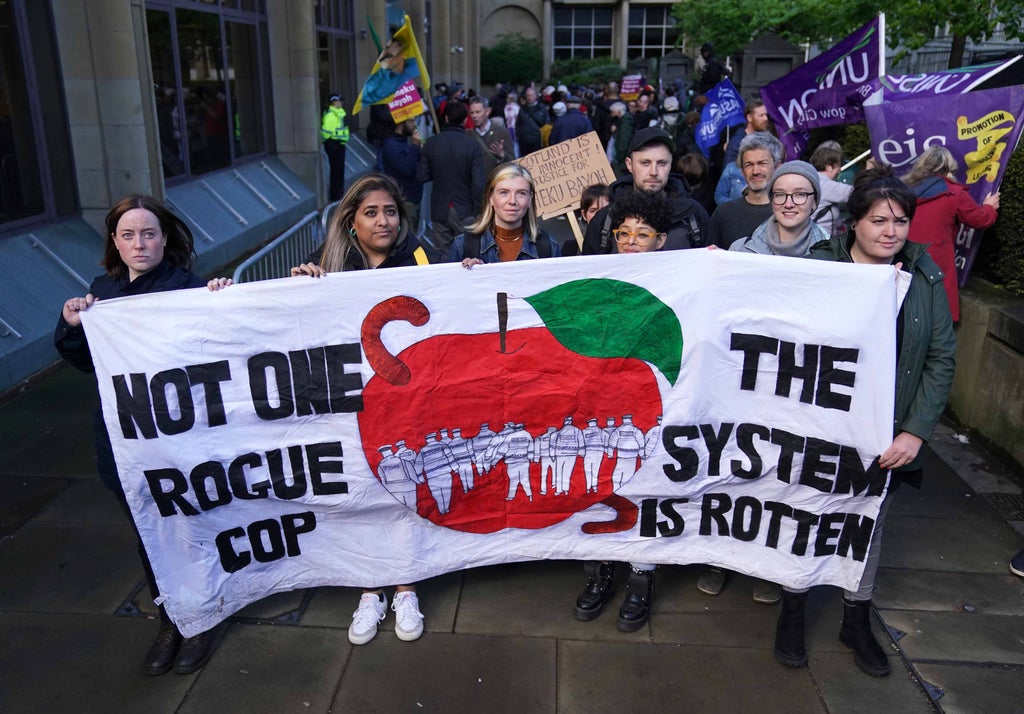 Protesters in Edinburgh have chanted “black lives matter” as an inquiry into a person who died whereas in police custody started.

Sheku Bayoh has been known as “Scotland’s George Floyd” by his household, who had been at Capital House on Tuesday for the opening day of the probe into his dying.

The 31-year-old trainee gasoline engineer died seven years in the past whereas being held by officers responding to a name in Kirkcaldy in Fife.

The public inquiry is now set to take a look at the circumstances main as much as his dying, what occurred afterwards and the following investigation. It may even look to determine the function the father-of-two’s race could have performed in his dying.

Protesters flocked to Capital House on Tuesday as the inquiry obtained underway.

Some had been holding footage of Bayoh whereas others had been holding banners urging folks to face as much as racism and calling for justice. Another learn: “Not one rogue cop, the system is rotten.”

Kadi Johnson, his sister, thanked protesters for becoming a member of the household in solidarity on the opening day of the inquiry.

“On behalf of my mother, and the rest of us, we are so grateful for your support. You have never left us for seven years, you have always been with us,” she mentioned.

The crowd chanted “black lives matter” and “justice for Sheku” as the household walked into Capital House.

No fees have been introduced due to his dying.

Mr Anwar, the household lawyer, informed a press convention on Tuesday Bayoh had been delivered to the bottom inside 50 seconds of law enforcement officials arriving on the scene in May 2015.

“He was handcuffed and retrained with leg and ankle cuffs, and would never get up again, losing consciousness and dying,” he mentioned.

“As Kadi said when they put her brother’s lifeless body in the ambulance, he was still shackled like a slave, with over 24 separate injuries, cuts, lacerations, bruises and a broken rib.

“Within minutes, the process of criminalising, smearing and stereotyping began to enforce an image of a mad and dangerous black man, wielding a knife and with stereotypical characteristics of extraordinary strength in an attempt to blame Sheku for his own death, but he was unarmed and never deserved to die.”

The household lawyer additionally mentioned it had change into clear to the household over time that the police, its watchdog and the Crown Office had “operated an unholy trinity of dishonesty, racism and incompetence”.

He mentioned the inquiry would permit the details to be established, and added it should now be allowed to get on with its work.