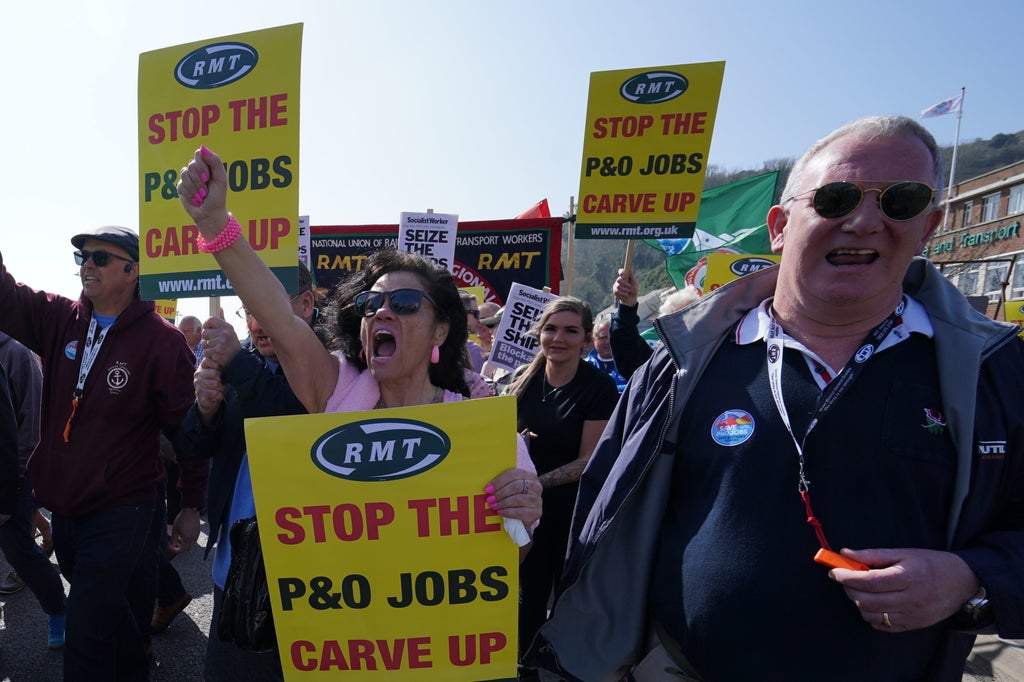 A plan to stop P&O Ferries undercutting the minimum wage as it recruits new employees, is not sufficient to “undo” its mass sackings as promised, a union is warning the federal government.

Grant Shapps, the transport secretary, is poised to change the legislation to shut the ferry operator out of UK ports except it abandons “sweatshop” pay charges as low as £5.15 an hour.

He is writing to Peter Hebblethwaite, the agency’s chief government, urging him to U-turn on the choice to sack 800 employees – with the menace that it should observe the wage ground of £8.91 an hour, rising to £9.50 on 1 April.

But the maritime RMT union is saying the transfer does not go far sufficient, after Mr Shapps final week, vowed to “undo” the mass sackings and shut a “loophole” that allowed them.

The transport secretary mentioned: “We’ll be returning to parliament with a package of measures to make sure that situation is undone,” – however No 10 then refused to again up the declare.

The Department for Transport is admitting that it’s not proposing to change the legislation to make sure the sacked employees are rehired and merely making use of political stress.

Alex Gordon, of the RMT, mentioned P&O have to be pressured to go additional, by guaranteeing the dismissed seamen’s current employment contracts are honoured – not merely pay the minimum wage.

The union is planning to step up protests, focusing on the maritime businesses concerned with recruiting new employees together with Clyde Marine Recruitment in Glasgow.

Mick Lynch, the RMT’s normal secretary, mentioned on Sunday: “There will be more protests, more campaigning and more political pressure this week as we ratchet up the fight.”

Keir Starmer has demanded more durable motion, together with in opposition to P&O’s mum or dad company DP World, which is poised to obtain “£50m as one of the freeports”.

The Labour chief additionally mentioned they’re unanswered questions in regards to the warning the federal government acquired the night time earlier than the redundancies have been introduced 11 days in the past.

Sir Keir referred to as the “pre-recorded video” alerting employees to their sackings “absolutely shocking” – as was Mr Hebblethwaite admitting P&O had “decided it was better to break the law”.

Labour had warned of the loophole within the legislation, Sir Keir mentioned, including: “Had that loophole in the law been closed two years ago, they would not have lost their jobs in the way they did.”

Last week, a authorities official admitted it had “no powers” to take P&O to courtroom – regardless of the agency admitting it broke the legislation by sacking the 800 employees with out consulting them.

However, the stakes have been raised by Boris Johnson insisting the controversy will go to courtroom and telling MPs: “P&O clearly aren’t going to get away with it.”

Mr Shapps then made his promise, final Thursday, saying his legislation modifications would “make sure that situation is undone”.

UK will not ration energy in response to Ukraine invasion – Shapps