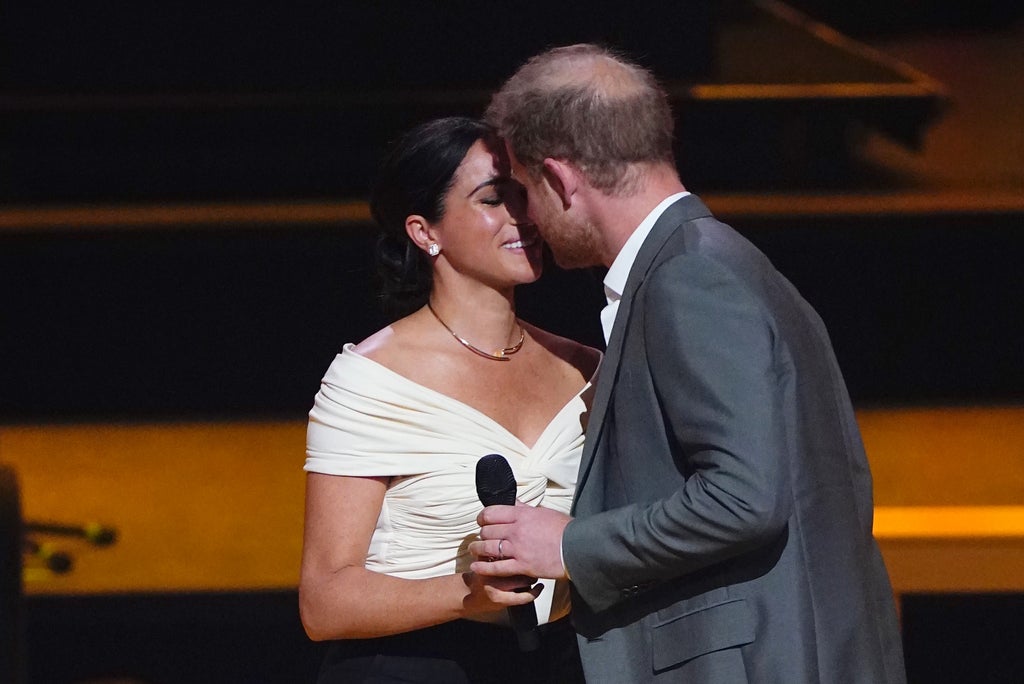 The Duchess of Sussex has publicly declared her love for her “incredible” husband Harry in entrance of an viewers of hundreds.

Introducing the duke at the opening ceremony of the Invictus Games in The Hague, Netherlands, Meghan stated she “could not love and respect him more”.

The pair kissed when Harry arrived on stage, and he appeared emotional earlier than his speech, saying: “Thank you my love.”

Meghan, wearing a white off-the-shoulder prime and darkish trousers, spoke for a few minutes earlier than welcoming Harry on stage within the venue which seats as much as 5,000 folks.

She stated: “It is my distinguished honour to introduce someone that I think you’ll all be very excited to hear from.

“He has also spent many late nights and early mornings planning for these games to make them as perfect as possible for each of you.

“I could not love and respect him more and I know that all of you feel the same, because he is your fellow veteran, having served two tours of duty in Afghanistan and 10 years of military service.

“He’s the founder of the Invictus Games, and the father to our two little ones, Archie and Lili. Please welcome my incredible husband, Prince Harry, the Duke of Sussex.”

The couple appeared completely happy and shut throughout their public appearances at the occasion, holding palms and putting their palms on one another’s backs.

The Invictus Games was the place the couple made their first public look collectively nearly 5 years in the past.

Meghan made her first look at an official engagement attended by Harry on September 24 2017 when she attended the opening ceremony in Toronto, Canada, though the pair sat about 18 seats aside.

The following day, they emerged hand in hand to make their first official public look collectively at the wheelchair tennis.

Coastal communities will be forced to relocate due to climate disaster, Environment Agency boss says