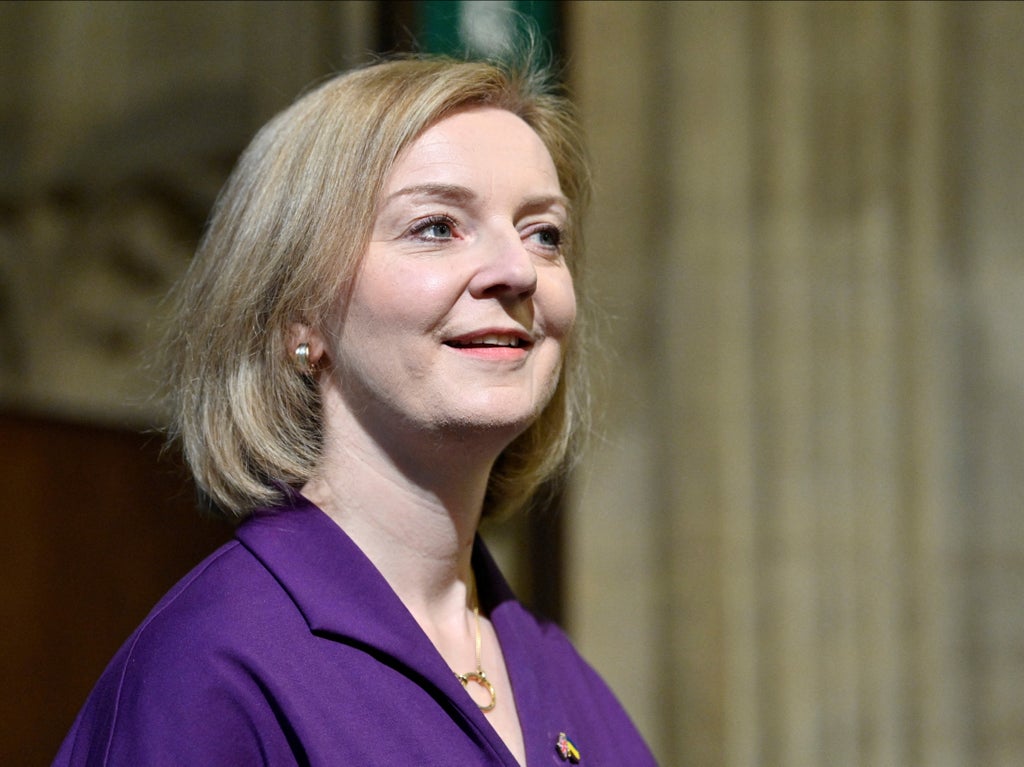 Michael Gove has stated he’s “super cool” with the concept of laws to tear up the Northern Ireland Protocol unilaterally – regardless of the danger it may spark a commerce conflict with the EU.

The levelling up secretary was stated to be livid about overseas secretary Liz Truss pushing for radical motion to take away protocol checks – however insisted on Wednesday that he was relaxed concerning the plan.

Asked how offended he was concerning the transfer on a scale of 1 to 10, Mr Gove informed LBC: “Minus five. I’m super cool with it. I’m a big, big Liz Truss fan.”

However, Mr Gove additionally claimed Boris Johnson was an “expert negotiator” and prompt the menace to ditch the protocol may very well be a part of UK negotiating ways.

It comes as overseas secretary Liz Truss stated the UK “will not shy away” from taking motion on the Northern Ireland Protocol after Boris Johnson indicated the state of affairs was “now very serious”.

Michael Gove has stated he’s “super cool” with the concept of laws to tear up the Northern Ireland Protocol unilaterally – regardless of the danger it may spark a commerce conflict with the EU.

Asked how offended he was concerning the transfer on a scale of 1 to 10, Mr Gove informed LBC: “Minus five. I’m super cool with it. I’m a big, big Liz Truss fan.”

However, Mr Gove additionally claimed Boris Johnson was an “expert negotiator” and prompt the menace to ditch the protocol may very well be a part of UK negotiating ways.

Claims of break up between prime minister and Sunak over emergency price range are ‘overinflated’, Gove says

Levelling up secretary Michael Gove has stated claims of a break up between Boris Johnson and chancellor Rishi Sunak over the necessity for an emergency price range have been “overinflated”.

Mr Gove informed BBC Breakfast: “It is an example of some commentators chasing their own tails and trying to take a statement that is common-sensical, turning it into a ‘major’ capital letters ‘big news story’.

“When the Treasury quite rightly say ‘calm down’, people instead of recognising that they have overinflated the story in the first place then say ‘Oh, this is clearly a split’.

“The truth is the Prime Minister says ‘Government is working hard’ and the Treasury say ‘Yes we are and I’m afraid the Budget is going to be when we said it would be’. That becomes a story? No.”

Talking to Sky News this morning, he stated: “There was nothing in the Queen’s Speech yesterday that recognised that there has to be a sense of urgence, people are facing real hardships.”

Pointing to power corporations hitting report-excessive earnings whereas low-earnings households need to make selections between heating and consuming, he stated the federal government has an obligation to offer extra assist similar to reinstating the £20 common credit score.

He stated: “Of course there’s no magic money tree but it’s about the responsabilities that you have.”

Cabinet minister Michael Gove has dominated out an emergency price range, as he insisted Boris Johnson’s suggestion of extra assist to ease the associated fee-of-residing disaster was “overinterpreted”.

The Levelling Up Secretary stated on Wednesday that claims of a break up between Chancellor Rishi Sunak and the Prime Minister over the necessity for extra monetary assist have been “overinflated”.

Under fireplace for failing to make use of the Queen’s Speech to announce recent assist, Mr Johnson prompt he and Mr Sunak would announce extra “in the days to come”.

But the Treasury rapidly shot down this suggestion, whereas No 10 conceded extra assist shouldn’t be anticipated within the “next few days”.

Mr Gove informed Sky News: “There won’t be an emergency budget. It is sometimes the case that the words from a prime minister or minister are overinterpreted.

“The Prime Minister is right. We will be saying more and doing more in order to help people with the cost-of-living challenge we face at the moment, but that doesn’t amount to an emergency budget. It is part of the work of government.

“Last night the Prime Minister convened a group of ministers – we have all done work on some of the things we could do to help. Those policy initiatives will be announced by individual departments in due course as they are worked up.”

Communities secretary Michael Gove has stated the UK will proceed to barter with the EU to resolve variations over the Northern Ireland Protocol however stated “no option is off the table”.

Foreign secretary Liz Truss has made clear her frustration on the lack of progress in talks with Brussels amid stories the UK may unilaterally abandon the protocol.

Asked on BBC Breakfast if the Government was going to “tear up” the settlement, Mr Gove stated: “No. We are going to negotiate with the EU in order to get the best possible outcome for the people of Northern Ireland, but no option is off the table.

“Liz Truss will be meeting Maros Sefcovic, the European Commission vice president, tomorrow. They have a good relationship. They will try to make progress tomorrow. I know that both of them are fully committed to making sure we resolve some very difficult issues that have arisen.

“You would expect a UK Government when it is thinking about the security of the entire United Kingdom to say that there is no option that is off the table and that is absolutely right.”

Sir Ed Davey has stated he was stunned that the Queen’s Speech didn’t do extra to sort out the associated fee-of-residing disaster after the Conservatives lost a whole bunch of council seats final week.

The Lib Dem chief informed Sky News: “I was expecting that after the people had said during the local election results they were not happy, the Government would take some action, but there was nothing for the cost of living.”

Sir Ed referred to as on the Government to fund a VAT reduce by a windfall tax on the “superprofits” of oil and gasoline corporations.

“When these oil and gas companies are making huge profits they never expected to make, these are huge superprofits, it’s only fair to ask them to pay the money to help people who are having to pay those bills,” he stated.

Asked concerning the Government’s obvious willingness to breach the Northern Ireland Protocol, Sir Ed stated it will be an “absolute disaster” for bizarre folks.

He added: “For Michael Gove and Boris Johnson and the rest of them to think that a trade war is the right way to deal with the cost-of-living crisis, an economic crisis, I don’t know what planet they’re living on.”

Michael Gove has stated there can be no emergency price range this summer time – insisting that the difficulty was “no big deal” regardless of the mounting price of residing disaster.

In a weird interview with BBC, the cupboard minister used a Liverpudlian accent to counsel that individuals to “calm down” over the shortage of any further monetary assist earlier than the autumn price range.

It follows confusion over Boris Johnson’s remarks that extra assist can be revealed in “the days to come”, earlier than the Treasury dominated out additional quick-time period monetary measures.

“The prime minister was making the point we are constantly looking at ideas to relieve the pressure on people facing incredibly tough times – but that doesn’t amount to an emergency budget,” Mr Gove informed BBC Breakfast.

My colleague Adam Forrest has extra:

Levelling up secretary Michael Gove has said the Queen’s speech will enable the federal government to “take advantage” of Brexit alternatives.

“There are more than 20 Bills which we hope will become law,” Mr Gove stated, including: “There are also measures in there which ensure that in the long-term we can take advantage of some of the freedoms and flexibilities that being outside of the EU give us.

“In order for example to use some of the money the government spends on industry to support some of the small and medium sized businesses which are the engine room of the economy.”

Talking to Sky News this morning, he stated: “A broader cut on VAT is the way forward, I wouldn’t just limit it to energy bills.”

He added that two and a half per cent off VAT “would give the average family an extra £600 a year” as he additionally prompt that the Warm Homes Discount needs to be doubled.

Levelling up secretary Michael Gove has stated the federal government is taking steps to “protect” people who find themselves most weak amid the associated fee-of-residing disaster.

“We try to protect those who are most vulnerable. We’ve already taken steps for example reducing council tax for people who are in particular council tax bands who tend to be at the lower end of the income spectrum, but we also keep a review on a number of things we can do both short-term and long-term.

“So for example, in the Queen’s speech yesterday there are steps we are taking to protect people who are renting, both those in the private-renting sector and those in social homes to ensure we can have security for them as well.”