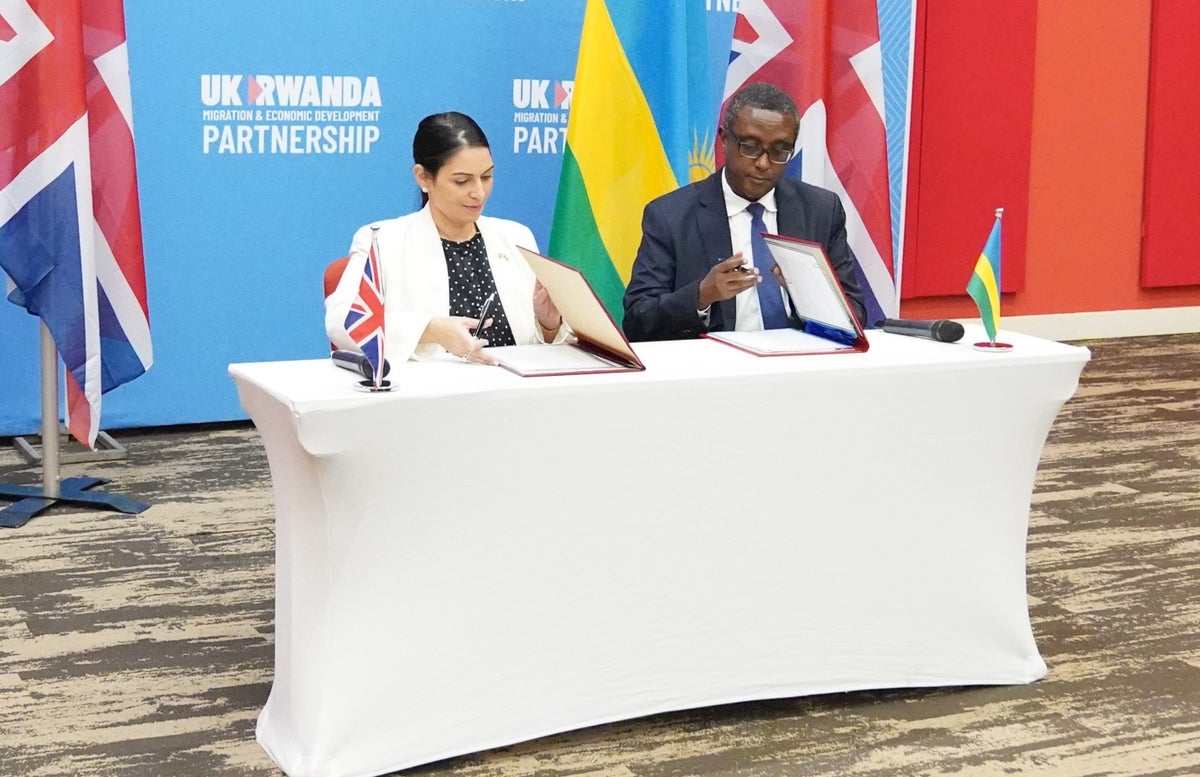 More than 90 public figures have written to the airlines suspected to be carrying refugees to Rwanda subsequent week, urging them not to fly the 100 or extra individuals whom the Home Office has focused for removal.

The letter, seen by The Independent, has been despatched to three airlines identified to have labored beforehand with the Home Office on deportation flights: Titan Airways, Privilege Style and Iberojet.

AirTanker, which has beforehand carried out Home Office removal flights, has now dominated itself out of taking part in subsequent week’s flights after a public campaign by the charity Freedom from Torture.

Zoe Gardner, coverage and advocacy supervisor for the Joint Council for the Welfare of Immigrants (JCWI), mentioned: “Most of us want to see people fleeing danger treated with care and compassion, regardless of what they look like or where they were born. Yet Priti Patel seems determined to treat certain refugees sadistically, brandishing her cruelty towards them as a way of scoring headlines and diverting attention away from her crumbling party.

“No airline should be offering to aid and abet these racist and senseless plans, which we know will tear siblings apart and put lives in danger. That’s why so many of us are coming together and calling on airlines to refuse complicity in this government’s gross assault on human rights.

“We believe that people who’ve sought safety here should have their voices heard, their rights respected and be given the chance to rebuild their lives alongside their families and communities here.”

The Public and Commercial Services Union (PCS) and the charities Care4Calais and Detention Action issued judicial review proceedings within the High Court, difficult what they described as an “unlawful policy” by house secretary Priti Patel to take away asylum seekers to the east African nation, it emerged on Wednesday.

The first flight from the UK containing migrants is anticipated to go away subsequent Tuesday, however legal professionals for greater than 90 migrants have already submitted authorized challenges asking to be allowed to keep within the UK.

Home Office officers are thought to be anticipating that the remaining 38 or so notified to be on the 14 June flight will observe go well with this week, however signatories are calling on the federal government to cancel the flight.

Meanwhile, members of the general public have despatched greater than 15,000 letters of protest to airlines suspected of involvement within the Rwanda scheme, in accordance to the JCWI, whereas a social media backlash noticed a number of of the airlines delete posts from Instagram and LinkedIn due to detrimental feedback.

The high-profile letter follows information that greater than 100 individuals who have sought asylum within the UK, together with individuals who have fled Syria, Sudan, Eritrea, Iran and Iraq, have been issued with removal notices for Rwanda, with some detainees scheduled to be eliminated on Tuesday 14 June.

The letter urges airline chiefs to refuse to function any flights on 14 June, the primary Rwanda removal flight this year, and to withhold from carrying out any future removals.

“We believe that everyone has the right to live a safe and dignified life…no matter what we look like, where we come from, or which borders we cross,” the letter reads.

Signatories additionally specific concern that individuals are being denied the prospect to reunite with relations right here and are being flown 1000’s of miles away from their assist networks in opposition to their will.

One one that was scheduled to be on the Rwanda flight, however has now had his ticket cancelled following their lawyer’s intervention, instructed The Independent: “We were living in a very difficult circumstances – we were tortured by smugglers. And now the government is doing the same – torturing us.

“I just want a normal peaceful life. I don’t know why they’ve put me here [in an immigration removal centre] and why they’ve threatened to send me to a country that people are fleeing themselves.

“Kurdish people have always fought for their freedom and I don’t think they would be able to live anywhere without freedom… I strongly reject the Rwandan government for making this deal. It is against basic human rights; they are killing humanity and doing it for money, and I oppose this.”

News of the UK-Rwanda settlement and upcoming removal flights emerged after Priti Patel’s Nationality and Borders Act handed earlier this year. The act makes it simpler for the federal government to detain, criminalise and take away individuals who’ve sought security within the UK.

The Home Office has been approached for remark.